San Diego has the following tattoos: a round image of burning hillsides in the center of his chest with the words "It only takes a spark" printed in a semicircle below; burning and collapsing buildings on the sides of his abdomen and back; and a single leafless tree rising from a road in the center of his lower back. These tattoos may have been significantly altered or covered with new tattoos. 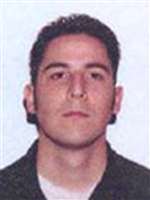 Summary
San Diego has ties to animal rights extremist groups. He is known to follow a vegan diet, eating no meat or food containing animal products. In the past, he has worked as a computer network specialist and with the operating system LINUX. San Diego wears eyeglasses, is skilled at sailing, and has traveled internationally. He is known to possess a handgun.

Daniel Andreas San Diego is wanted for his alleged involvement in two bombings in the San Francisco, California, area. On August 28, 2003, two bombs exploded approximately one hour apart on the campus of a biotechnology corporation in Emeryville. Then, on September 26, 2003, one bomb strapped with nails exploded at a nutritional products corporation in Pleasanton. San Diego was indicted in the United States District Court, Northern District of California, in July of 2004.

The FBI is offering a reward of up to $250,000 for information leading directly to the arrest of Daniel Andreas San Diego.

SHOULD BE CONSIDERED ARMED AND DANGEROUS

If you have any information concerning this person, please contact your local FBI office or the nearest American Embassy or Consulate.


If you have any information concerning this person please submit an anonymous tip at www.northerncaliforniamostwanted.org